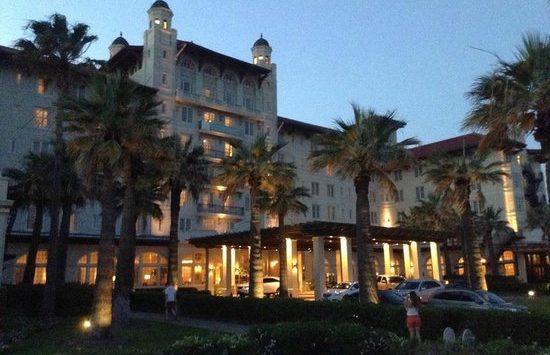 Some girlfriends and I took the hour-long trip from Houston to Galveston and checked in at the Hotel Galvez Resort and Spa for some R&R. This Wyndham Grand Hotel is listed as one of the top 10 hotels in Galveston on Tripadvisor. Upon arriving, I could see why. The only historic beachfront hotel on the Texas Gulf Coast, Hotel Galvez boasts 13,000 square feet of elegance and charm.

The 106-year-old structure also has an interesting past. It’s one of the most haunted hotels in the country. THAT’S RIGHT! HAUNTED! It was built on the site of an orphan asylum and it is said that the spirits of those killed in the hurricane of 1900 still roam the hotel.

Among its nearly 230 rooms, the most popular is room 501. It was there a hotel regular by the name of Audra stayed in the 1950’s. Legend has it that she hung herself in the west tower of the hotel after hearing that her lover was believed to have died while at sea. It is said that Audra’s spirit never left the hotel after her death and curious visitors come from all over the world to stay in infamous room 501.

The hotel staff (along with its exceptional service) provide visitors with year-round ghost tours and first-hand accounts of “spooky” experiences that include witnessing doors slam, hearing a mysterious little girl playing in the hallways and seeing a man dressed in 1700’s military style clothing walking the lower level. Employees all seem comfortable with the ghost’s presence. The cashier at the gift shop described them as being “friendly and curious”.

There were two creepy encounters that I personally had during my stay. The first was the painting of Bernardo de Galvez that sits at the end of the downstairs hallway. DON’T GET TOO CLOSE! The eyes appear to shift and follow you as you move from left to right. It is also said that it is nearly impossible to capture a clear photo without FIRST asking de Galvez’ permission. Although I think this one is pretty good.

And then there is the basement of the hotel where the Hall of History is housed. I KNOW! IT’S ALWAYS THE BASEMENT, RIGHT?! The moment I stepped down the stairs and approached the first glass case, I felt like someone was peering over my shoulder. Between our ghost detector going off like crazy and my anxiety, it’s safe to say that the lower level is DEFINITLEY home to some supernatural activity!

Overall, my stay at Hotel Galvez was actually relaxing and eventful. I would encourage anyone who visits Galveston looking to have a memorable experience to check in. As long as it isn’t room 501!